As an introduction
Here you will not find a complete overview of the rich amount of information on these themes, but only a selection of lesser known but remarkable things. 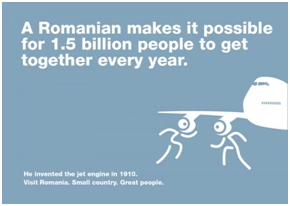 Romania has a number of scientists of great renown in that their discovery is known worldwide, but the name of the scientist is relatively unknown. For example, there is the discoverer of insulin who has been in the name of Nicolae Paulescu since 1922. Or Stefan Odobleja who is the founder of cybernetics. The Bucharest airport bears the name of Henri Coanda, the inventor of the jet engine, without him modern air travel would not be possible. A simple utensil like the fountain pen whose patent has been granted to Petrache Poenare. More famous is the internationally renowned gerontologist Ana Aslan, who among her clients had celebrities such as Tito, Charles de Gaulle, Nikita Khrushchev, John F. Kennedy, Indira Gandhi, Imelda Marcos, Marlene Dietrich, Konrad Adenauer, Charlie Chaplin, Kirk Douglas, Salvador Dalí to calculate. In short, the result of its activities was that it applied anti-aging agents. Inventions to her name are the Geriatric product Aslavital and the vitamin H3 (Gerovital), a geriatric product patented in more than 30 countries.

Art & Culture
A uniform definition of art and culture cannot be given and is often used as a “catch-all term”. There are many well-known names such as

including the sculptor Constantin Brancusi, of which a few works of art can be admired in the Dutch Kröller-Müller. Classical music lovers are familiar with Romanian composers such as George Enescu and Bela Bartok. It is worth mentioning that the Dutch conductor Raymond Janssen has been drawing full houses in the Netherlands for more than five years with the New Romanian Symphony Orchestra & Choir from Timisoara (see www.cadenza-productions.nl). In the lighter genre, Gheorghe Zamfir is internationally known as a pan whisperist.
Romania also has a lot to offer in the field of literature, such as Herta Müller who received the Nobel Prize for literature in 2009. Or the poet Mihai Eminescu, who, however, is less known in the Netherlands. The Dutch who wrote and write about Romania are the journalist Olaf Tempelman (De Volkskrant) and in particular Jan Willem Bos. The latter has many Dutch translations of prominent Romanian writers to his name and the website www.bibliografieroemenië .nl contains almost all books translated into Dutch, including by contemporary writers. As an outsider in this very limited enumeration, the philosopher Emil Corian should certainly not be forgotten, whose essay “Existence as seduction” has been translated into Dutch.

The following platforms are active in the Netherlands that deal with art and culture: Salon de Arte Carmen Sylva (website: www.carmensylva.nl )